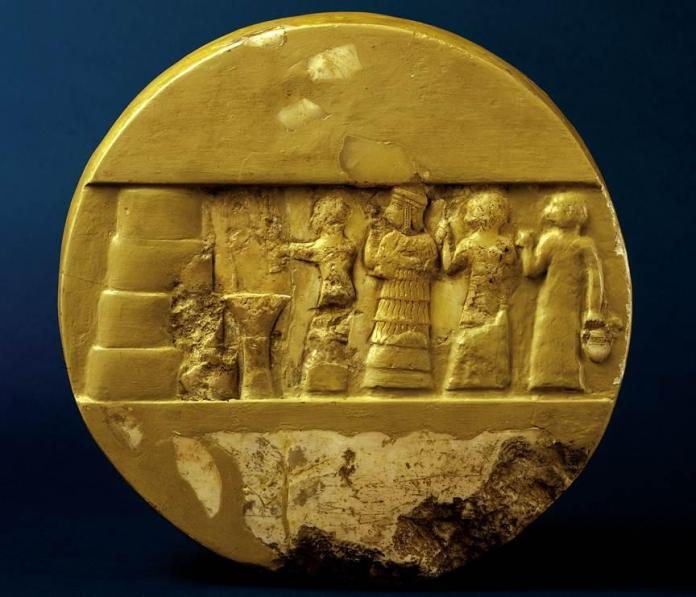 (Above:  Enheduanna, her Estate Manager Adda, her hair dresser Ilum Palilis, and her scribe Sagadu.)

Enheduanna. En (chief priestess) hedu (ornament) anna (of the Sky God, An) died in 2250 BC at the age of 35, having written poems for all ages. Her words,
“How she carried beauty like the rising moonlight”
reminds one of Byron’s,
“She walked in beauty like the night.”
Poets are timeless.

As the daughter of Sargon The Great, whether that was a title of blood or conferred by decree, Enheduanna was tasked by Sargon to aid him in the unification of the various peoples he had conquered. She contributed by writing hymms to be sung in seven temples throughout Sumeria. (I suppose this means she was also the first propagandist 🙂 )

“Sargon placed enormous trust in Enheduanna in elevating her to the position of high priestess of the most important temple in Sumer [Ur] and leaving to her the responsibility for melding the Sumerian gods with the Akkadian ones to create the stability his empire needed to thrive. Further, she is credited with creating the paradigms of poetry, psalms, and prayers used throughout the ancient world. … Through the Babylonians, they influenced and inspired the prayers and psalms of the Hebrew Bible and the Homeric hymns of Greece.”
– Joshua J. Mark, published on 24 March 2014, http://www.ancient.eu/Enheduanna/

Enheduanna addressed her poetry to gods but it was often deeply personal. When temple intrigues forced her into exile, she wrote,
“I, accustomed to triumph, have been driven forth from my house
and made to walk among the mountain thorns.
The life-giving tiara of En-ship was taken from me.
Eunuchs were assigned to me –
‘These are becoming to you,’ it was told me.
The fruitful bed has been abolished
so that I have not interpreted to man the commands of Ningal.
I no longer dwell in the goodly place You established.
By day, the sun scorches me,
By night, the shade overwhelms me,
My honey-sweet voice has become strident,
Whatever gave me pleasure has turned into dust.”
http://classicalarthistory.weebly.com/1/post/2012/04/enheduanna-poems.html

It’s hard to keep a good poet, and daughter of Sargon, down. Enheduanna was restored to her position. Her works became known throughout the ancient world for another 2,000 years. She was discovered again in 1927 at the Sumerian site of UR, depicted on a calcite disc.
“The royal inscription on the disc, reads: ‘Enheduanna, zirru-priestess, wife of the god Nanna, daughter of Sargon, king of the world, in the temple of the goddess Innana.'”
– Joshua J. Mark, op cit

10 thoughts on “The First Named Author”