James Tiptree, Jr. — aka Alice Sheldon — wrote a story back in 1974 called “Her Smoke Rose Up Forever.” It’s a tale about memory. Scenes from a life play out one after another: a boy on his first duck hunt, failing miserably; a young man in his first, eager sexual encounter, failing miserably; a man back from war proposing, finally, to the woman he loves, failing miserably…you get the idea. Framing this jumbled litany of humiliation and disappointment is the gradual realization that all of these memories are playing out in a sort of repeating loop, observed by — perhaps even instigated by — some unknown presence: alien researchers perhaps? Or even just alien sightseers, feeding on the memories of the long gone inhabitants of a dead world? Because the earth is dead, a burnt out cinder. All that remains are memories.

But — and here’s the gut punch — the only memories left are unpleasant ones. Only the horrible stuff, incidents our protagonist would rather forget. Instead, he gets to live them out again and again.

A hellacious vision. Thanks, Alli. 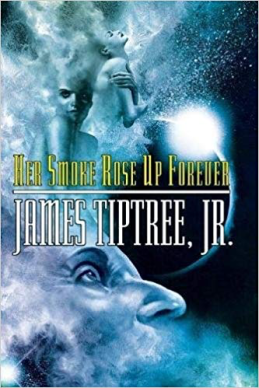 But still, a fascinating premise. Sad memories, painful memories, seem to have a disproportional staying power. Enjoyable memories can linger as well, but they are less vivid, less intrusive. It seems like we have to go looking for those, we have to coax them to the surface. But deeply unpleasant memories find us. We have no idea when they might swim into sudden focus. It’s like they’re always lurking in the shadows, just around the next corner.

There’s a good reason, of course, why we would be predisposed, genetically, to have a better memory for the unpleasant things. After all, unpleasant things are often dangerous things, and it’s an adaptive advantage to avoid danger. If a situation feels unpleasantly familiar, you’ll tend to shy away from it and not repeat it. As for joyous memories of good times, well, it’s nice to remember them, but it’s not usually a matter of life or death. Lack of joy might kill you in the long run, but it’s only a gradual death and it won’t necessarily interfere with your ability to pass on your genetic code.

But danger? That can kill you right now, the immediate termination of your particular configuration of base pairs. So we avoid unpleasantness. It’s baked in, a survival skill.

And to avoid it, we have to recognize it. We have to remember. If I were an alien, researching the former dominant species of an extinct planet, I might focus on exactly that: what drove their worst memories? What were they so afraid of?

So how does this concept relate to stories? Does this predisposition explain why we have such an appetite for tragedy, for conflict-driven narratives? Such a fascination with crime and horror and dystopian futures? Could be. I’d admit that there are other factors. Catharsis plays into it — and the guilty thrill we might feel at experiencing someone else’s misery while knowing it isn’t our own. But it isn’t hard to see how these pleasures might have their roots in the original preoccupation. Suffering fascinates us because it’s important to our survival. We rubberneck the freeway accident because, at some level, we know that could be us.

And if it might kill us, we need to know about it.

Footnote:  It feels worth mentioning that some of our most persistent personal memories are of rejection and humiliation, which might not correlate directly with situations of danger or physical threat. We don’t, as a rule, die of embarrassment. But being rejected or humiliated, at least publicly, can be correlated with social ostracism, which could be almost as bad as death. In terms of passing your genetic material on to the next generation, it could be exactly as bad as death. The process of natural selection really doesn’t put a priority on our happiness. It’s only concerned with us surviving long enough to procreate.

Another Footnote: I would accept that being joyless might be a hindrance to finding companionship and a partner for procreation. But this seems to me a very modern view of our mating relationships. While romance isn’t very new, it’s pretty new compared to our time as a species, and there’s good reason to believe that marriage probably developed more as a practical arrangement and didn’t necessarily require having a winning personality or a great outlook on life. Fortunately, we’ve progressed beyond that point, mostly — but that’s a subject for another time.

Mimi Speake is an historian of sixteenth century Europe & therabouts. She delves into the private lives of such as Bernard Délicieux, the Friar of Carcassonne and Henry of Navarre. Nothing seems to delight Mimi more than to accurately include in her stories obscure details about the financial information of a walled town from that period, or a seminal work on algebra, or even lore about La Fée Verte, the green fairy.
And uh, Mimi is the only historian I know. So, I have a question for her.

Is Google messing with history? Not on purpose. But is that repository of human knowledge fatally flawed because of what it does not include?

I ask because I recently searched for early reviews of Arthur C. Clarke’s first book, Against the Fall of Night, published by Startling Stories magazine in 1948. Despite the story itself being vintage Clarke, the novella was initially panned for its word dumps of the author’s social theories. They added nothing to the story. I know this because I read it as a kid and I still remember my eyes glassing over the pages of preaching.
A few years ago, I re-read it. The book that I re-read said it had been published only because fans had expressed interest in reading Clarke’s first novel. It’s forward discussed Against the Fall of Night’s initial reception (dismal) and included some of those early reviews (bad.)

But Google has unwittingly rewritten history. I cannot find any of those original reviews. The Fall of Night is today presented as if it hadn’t bombed; as if it is just another good book by Clarke, even though he had to rewrite it in 1956 as The City and the Stars.

I know. I know. Google is not a complete history of anything. It is only a collection of whatever bits people put on the ‘Net. (But I wonder how many people think about things that are not on the Internet.)

So, Mimi, if I may follow-up, how do you find information that is not on Google?

And for everyone, a broader question:
To what extent are search engine results and social media the background against which we frame our questions? Do they guide the answers that we accept?
In short, does the Internet shape our collective consciousness?

Being conscientious about spreading my online presence far and wide, I naturally have a Goodreads author page. Not a lot happens there but the other day I received my first question. I wondered who was so kind as to want to know my opinion on anything, but when I looked, I was informed the question came from… Goodreads. Perhaps they have an algorithm that spots lonely authors and tosses them a question every now and then. I thought it was very decent of them, anyway, so actually took the trouble to reply.

The question was, ‘Who is your favourite couple in fiction and why?’ It took me quite a long time to come up with an answer because all the couples I could think of came from my childhood and weren’t really couples in the conventional sense.

The closest I got to an actual ‘couple’ couple was:

Hmm… Not very literary, I thought. So after racking my brains a bit, I came up with Oscar and Lucinda, from Oscar and Lucinda by Peter Carey. That’s extremely literary. And they are actually a lovable, eccentric, tender, tragic, unforgettable couple. Oops – did I say unforgettable? The thing is, when it came to explaining my choice, I could hardly remember a thing about them. And I thought of Carl’s apothegm of wince n° 85: “I never remember what I read. So why read? Waste of time.”

Of course, it isn’t a waste of time because (a) the book was fabulous when I read it and (b) now I can read and enjoy it all over again. But it does say something about memory and getting old. Still, I won’t go into that here.

What about you? Any favourite couple in fiction?