I am not a sarcastic person. Sarcasm strikes me as mean — snarky condemnations passive-aggressively issued by arrogant people desperate to feel superior to those they ridicule. Those who are not the target may think it’s witty, but maybe they’re just relieved and smugly enjoying the fact it wasn’t aimed at them. After all, does anyone really deserve such ridicule? I’m inclined to give all* people the benefit of the doubt, and accept their occasionally foolish, irritating, mind-raspingly stupid behavior as an entitlement every human may claim. Even I could claim it if I were ever foolish, irritating, or stupid. None of which, of course, I ever am.

That’s the reason Romero Russo was such a revelation. More than two years ago, Romero started writing a book called Sarcasm Font. My first public view of him was on Inkshares during a marketing contest. After completing the first five chapters of his ambiguously fictional story, he started blogging. People found his writing funny and thoughtful: 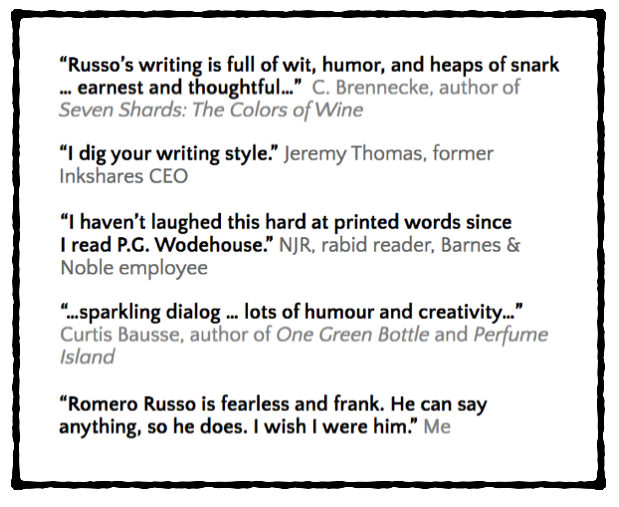 Here’s the thing. I am him.

That’s right. Following an unexpected series of events leading to my brain slurring two words into a word you won’t find in the OED, a fit of whimsy took over. I began writing Sarcasm Font in a voice so unfamiliar to me that I couldn’t even claim author credit. Romero Russo was born. He had a life of his own. He didn’t speak to me; he spoke through me. No doubt other authors have had the same out-of-voice experience. I suspect they would agree: it’s freeing.

Like many authors, I’ve written characters who say sarcastic things. Readers have commented that each of my characters has an individual, identifiable voice. But writing and living from inside a character whose voice differs drastically from your own is more like acting. If you allow that person to tell the whole story, the writing experience is more like watching the story than creating it.

When Romero went public on Inkshares, the circle who knew about the two of us was small: two of my sisters and my son. They were kind enough not to share Romero’s secret, but they weren’t shy about letting me know they thought it was kind of creepy that I talked about him as if he were real. He and I shared a Venn diagram overlap of followers, and we followed each other. Why wouldn’t we? We were marketing separate works by separate authors.

But when we started blogging, we were sharing our “selves” with strangers. That’s when it became a hoax. No one questioned it. Why would they? He said things I would never say. It was just so darn much fun to be Romero Russo.

After the 2016 A to Z Blogging Challenge, Romero went silent on WordPress. I was still working on Sarcasm Font, and planned to promote it under his name. I began to question the practicality of that when I wrote the short story behind one of his… um, life events, and entered it in a contest. Entry required a bio and a photo. I had those, no problem. But on the chance — however remote — that it won a cash prize, or was short-listed to be published in the anthology, wouldn’t I want the cash and/or credit to be mine? Yes. Yes I would. I submitted it under my name, and while it didn’t win any cash, it was published in the contest anthology. I got all the credit.

I also gave myself up. Someone — I leave the choice to acknowledge this to him — who follows both Romero and me procured a copy of the anthology and read my story, which I, appropriately though perhaps indiscreetly, called “Sarcasm Font”. He allowed that I might merely have appropriated Romero’s premise, but he also suspected that we might be one and the same, despite the difference in voices. When he asked me directly, I couldn’t bring myself to resort to “alternative facts”. I confessed.

My hope is that others may take some inspiration from this tale. If you haven’t yet written an out-of-voice story, I highly recommend it. It will open your mind to discover voices you didn’t know you had. Ideas that have never occurred to you before will flow. You might find your very own Romero Russo.

*(Except for one person to whom I gave a chance, but whose consistently reprehensible behavior has depleted my ability to tolerate. I might need Romero to speak for me for the next four years.)

S.T. Ranscht lives in San Diego, California. She and Robert P. Beus co-authored ENHANCED, the first book in the young adult Second Earth Trilogy. She is currently submitting their baby to literary agents, determined to find the one who is their perfect match. Her short story, “Cat Artist Catharsis”, earned Honorable Mention in Curtis Bausse’s 2016 Book a Break Short Story Contest, and is available in its anthology, Cat Tales. “Sarcasm Font” appears in the 2016 To Hull and Back Short Story Anthology. Find her online: on WordPress at Space, Time, and Raspberries, Facebook, Twitter @STRanscht and Instagram @stranscht. You can follow ENHANCED on Facebook, Twitter @EnhancedYASyFy, and Instagram @secondearthtrilogy.

Searching for a second, well maybe third, cup of coffee, I pass the TV and see Tea Party demonstrators on the same street as Black Lives Matter separated by cops with dogs in the middle. Imagining PETA showing up to protect the police dogs sets me to grinning at the thought of feminists, environmentalists and immigration activists joining the melee, all for attention, donations and votes.

Bob vs the Aliens
To read Writing DaysZ 1-3, go to ROFLtimes.com/BvA.pdf

Returning to the lanai with a mug of Guatemala Antigua, I attempt to ignore the TV lest it throw me off my thought track but am caught by whoops of frivolity from the morning news team. The news ticker scrolling at the bottom of the screen reports a night club shooting that left 6 dead. Live onscreen, a bleached blond fakes intense interest in a guy with a perfectly groomed unshaven look telling us about a restaurant named Prunes. They serve tripe. He hilariously tells how he and his friends held a contest to see who could eat the grossest things. Knee slapping follows. The ticker quotes a man mourning his murdered younger brother.

Whooping News Loonies
… to be continued
(Follow Writing DaysZ to read Bob Vs The Aliens as it is being written. To read Writing DaysZ 1-3, go to ROFLtimes.com/BvA.pdf)