There isn’t yet a reblog button on this site, so I’ve just copied the first two paragraphs along with a link to the full article. A good report by Andrew Updegrove on the options open to you if you want to advertise your book.

Over the last ten years, literally hundreds of services have sprung up that send daily newsletters featuring discount and free ebooks to subscribers. The king of them all is BookBub, with millions of subscribers. Unfortunately, unless you’ve written a real best seller, it’s almost impossible to get them to accept your book (and if they do, it will set you back as much as $1000 for that one-shot ad). The good news is that out of all the rest, there is a very small handful of services that can help you sell lots of books. The key is to figure out which they are, and what type of promo to run. Read on, and I’ll share what I’ve learned through running hundreds of ads over the past two years with scores of these services.

In order to find out which sites can produce, whenever I tried a new service, I ran it alone at a time I wasn’t doing any other significant promotion. And two cautions before I go into the results: first, each of my books is a thriller. Your results may vary if you are in another genre. And second, it’s a dynamic marketplace, with many services rising and falling in effectiveness all the time.

The results and discussion can be found at:

So you have book coming out and you want to make a splash. Here’s something that could work.

Step One: approach everyone you know and beg/cajole/threaten them until they agree to read an advance copy of the book and post a review at Amazon.com. A hundred reviews would be good, but realistically? Aim for ten. This probably means settling for five. The main thing is getting some reviews up, because nobody likes a blank page.

Step Two: Time your release so that it coincides with your promotional blitz (or tsunami, or barrage, or whatever other noun implies an all-out onslaught) and set up an Amazon countdown deal, temporarily setting the price at $0.99 or (if you’re really serious) for free.

Step Three: Blitz time! Submit your book to a whole bunch of book subscription services: Fussy Librarian, BookZio, Genre Pulse, Bargain Booksy or Free Booksy depending, etc. There are a lot of them out there and the more the better. (Note: The king of them all is BookBub, but you’re probably not going to get accepted at BookBub until you’re at least James Patterson). Set it up so all of these services will be listing your book in their mailers and other promotional materials during blitz week.

Step Four: Promote the hell out of your blitz on Facebook, Twitter, Googleplus, and anyplace else you can think of. Hand out flyers on street corners. Hire a skywriter.

Step Five: At the appropriate moment, release your book.

Goal? Well, one marketing guru suggests that in order to get Amazon.com’s attention, you want to sell at least a hundred books. And not cumulatively, but in a short period of time, say 48 hours. I’m not sure how he knows but this, he claims, will unlock the magic door, and Amazon’s own promotional machinery will click into action resulting in big time sales for you. Not millions (sorry), but thousands anyway. He claims to reliably get four or five thousand sales with every book release using this exact method.

Step Six? Write another book and do it again. You may never get on the bestseller list, but if you can write five or six books a year (ha!) and sell 5000 copies of each, well…it ain’t exactly easy street (especially after expenses) but it’s a living. And presumably, it gets a little easier each time. Easier to find reviewers, easier to get repeat sales, easier to get the attention of BookBub.

That’s how it could work. I think sometimes I come off as the maven of gloom around here, so I wanted to present a potentially winning scenario. 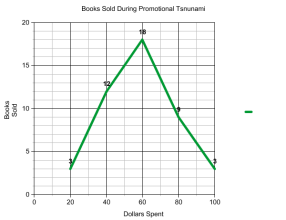 A Graph With Numbers To Give The Impression I Know What I’m Doing.

BUT (and this’ll surprise you) I’ve got some serious caveats. In the first place, getting even five reviews before release is a challenge (much less 100 reviews which is pure fantasy unless you are already well-established and have a dedicated team of readers.) And if this is your first book (with only a handful of reviews), enticing 100 strangers to buy your book is going to be tough. Plus, the method is not cheap. Most of those subscription services charge money for you to post your book, between 20 and 40 dollars usually (not counting BookBub, which charges a LOT more than that) so if you line up six of them, that could be 150 dollars easy. Yes, this is an investment, but if you’ve already paid a few hundred for a cover design and a few hundred for editorial services, well, it’s all adding up pretty fast.

A few weeks ago, I ran a smallish blitz on my novel Flight of the Wren. I had it listed five places, did a big twitter push, blogged about it. In the end, I sold 33 books over a four day period. So…underwhelming.

In addition, it did almost nothing for my visibility on Amazon. At my lowest (highest?) point, my sales rank went all the way to 15,000. It’s the best I’ve ever hit, certainly, but it quickly fizzled back to normal again within a day or two. So no lasting effect. Maybe the aforementioned guru is right, and you have to rack up at least 100 sales in 48 hours or Amazon’s promotional algorithms will simply ignore you. That’s a pretty damned discouraging number if it’s true. This is not my first time paying to get my book listed. It’s fun to see your book listed. It’s fun to see a sudden spike in your sales. But ultimately, the promotions haven’t resulted in further sales and I haven’t broken even, sales-wise, on any of these ventures. Probably better than GooglePlus or Amazon’s own pay-per-click promotions in terms of cost-effectiveness but still, not great.

Your mileage may vary, of course. Anyone? Any success stories you want to share? Anyone get a nice lasting bump in Amazon sales out of a similar promotion?